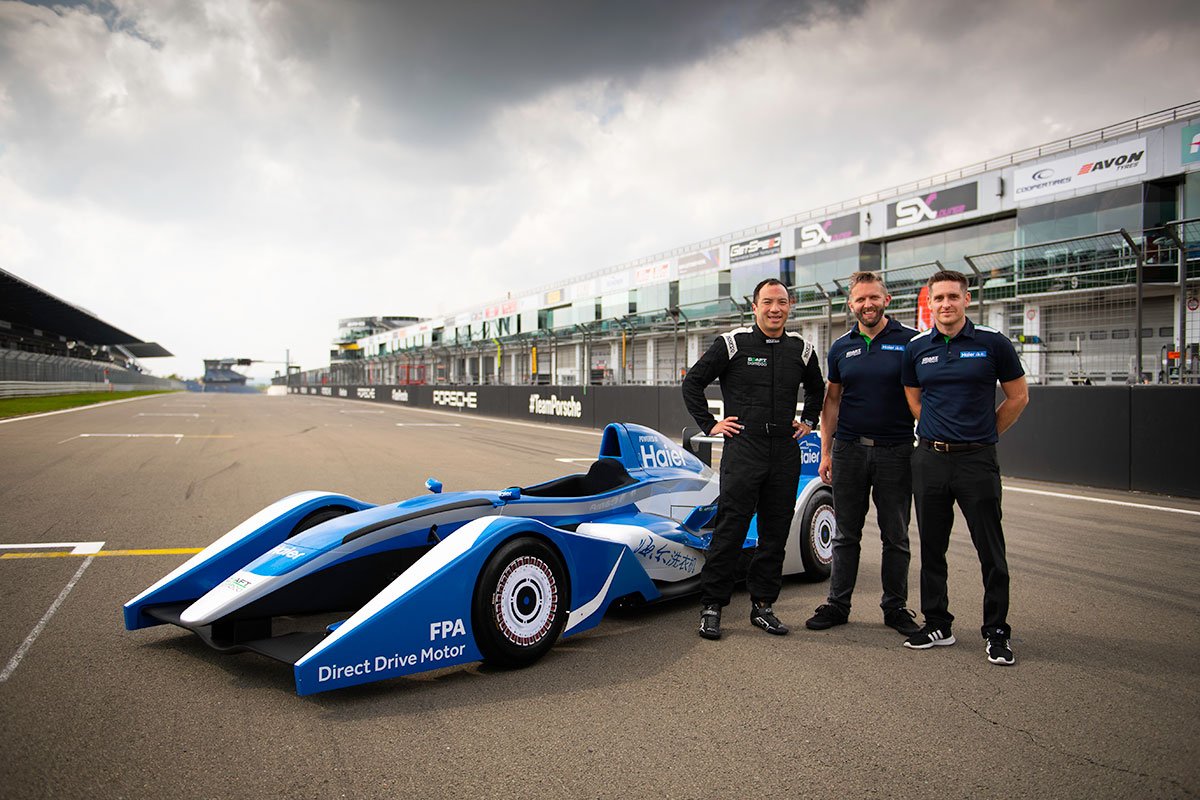 Back in May 2019, Craft-Bamboo Racing and Haier Washing Machine, a leading global household appliance manufacturer, revealed the Formula Haier, a formula car powered by a Haier Direct-Drive washing machine motor. Aligning with the values of forward thinking and innovation that both Haier Washing Machine and Craft-Bamboo Racing share, upgrades to the Formula Haier have been undertaken. The five-motor upgrade aims to increase overall performance, further pushing the limits of possibilities with Haier’s patented FPA Direct-Drive washing machine motor.

Haier Washing Machine and Craft-Bamboo Racing proceeded to seek ways to increase performance of the Formula Haier, with the main focus of the upgrade on the electric drivetrain. Haier’s FPA single patented 28-36 Electromagnetic Direct-Drive motor that powered the Formula Haier exceeded Craft-Bamboo Racing’s expectations, and the engineering team decided to increase from one-motor to five-motors for Phase 2.

To put the five-motor Formula Haier to the ultimate test, Craft-Bamboo Racing took the washing-machine motor driven car to the world-famous Nurburgring. The Nurburgring is one of the most challenging, unpredictable circuits in the world, made famous by its significant elevation change and high-speed corners. A short film, titled “Formula Haier – The Next Generation” was filmed to cover this next phase in the Formula Haier project, and showcases the upgrades as well as the on-track debut of the Formula Haier. 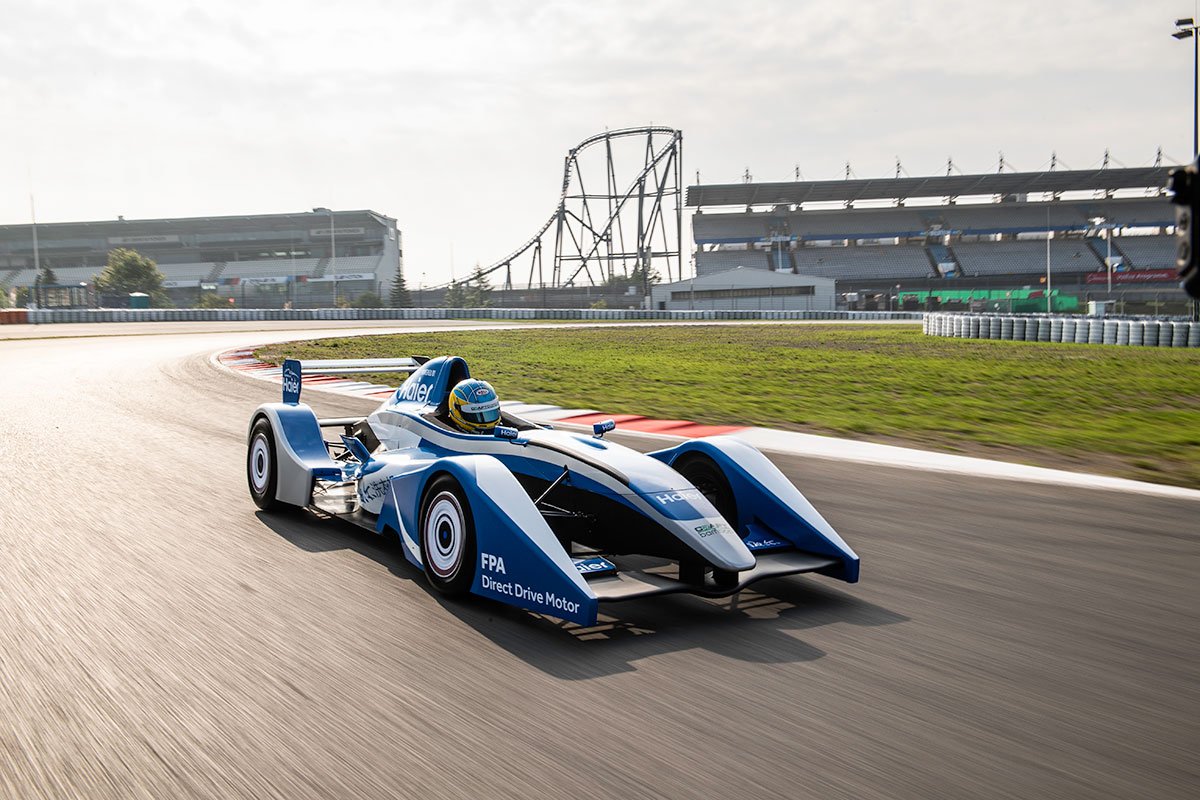 To further showcase the Formula Haier on a global stage, Haier Washing Machine will exhibit the Direct-Drive washing machine motor-driven formula car at the the IFA show in Berlin, in September 2019. The IFA show is the world’s largest consumer electronics trade fair, selling out 161,200 square meters of exhibition space to over 1,800 exhibitors. Held at the Messe Berlin Exhibition Grounds, the IFA in Berlin will present the latest products and innovations to trade as well as the general public. This creates a meeting place for key retailers, buyers and experts from the tech industry as well as the media.

With over 250,000 visitors expected to gather for the IFA show in Berlin in September, significant media attention will be on Haier’s dedicated booth and on the Formula Haier, showcasing not only the strength and robustness of Haier’s patented 28-36 Electromagnetic Direct-Drive motor, but also the creative applicability and innovation shown by Haier Washing Machine and Craft-Bamboo Racing.

Darryl O’Young | Director of Craft-Bamboo Racing
“Today we launch phase 2 of the Formula Haier, which sees upgrades to the car for power delivery. To put this car to the test, I drove it on the Nurburgring GP circuit, which is full of elevation changes. In the final sector, it’s a steep Incline and the car made it to the top without issue, which is quite amazing considering these are motors used in everyday washing machines. It’s been a fun project to date and we look forward to unveiling the car with Haier Washing Machine to the European public at the IFA show in Berlin.”

Russell O’Hagan | Operations Director of Craft-Bamboo Racing
“For the second phase of the Formula Haier project, we have upgraded the single-motor up to a five-motor installation. From the outside, not a lot has changed, but underneath the skin, this is a very different machine. Clever engineering solutions had to be taken to tackle various challenges that arose from this installation, for example, we needed to have a larger Variable Frequency Drive to power all the five motors, and we had to re-package the electronics inside the car to fit this. To see the Formula Haier successfully drive on track at the Nurburgring was a great moment for us. Overall, we’re really pleased with the result, and the IFA show in Berlin will showcase innovation at a global level. “

Kevin Sun | Haier Washing Machine Public Relations Media Director
“After the successful launch in Wuhan back in June, we looked to Craft-Bamboo Racing to find ways to further develop the Formula Haier, to push the boundaries of possibility of our technology on the race track. Craft-Bamboo Racing’s solution to increase the number of Direct-Drive motors worked effectively, and we were able to complete a lap of the Nurburgring, no mean feat for a car powered by Direct-Drive motors originally intended for washing machines. We’re excited to show the world what we have accomplished, as well as the mighty strength demonstrated by Haier Washing Machine’s advanced technology.”

The Formula Haier’s presence at the IFA exhibition demonstrates Haier’s brand power in global distribution. Haier Washing Machine have adapted the direct motion motor in a full range of products. Much like an engine in a car, the motor realizes the full functionality of the washing machine. The newly launched G3 direct motion motor is firm and thin, and has extremely impressive power output whilst being stable in operation. This washer also features the ultrasonic I-Refresh function with an ultrasonic atomization module that turns water into micro-water molecules that penetrate through the fibre and permeates over the clothes, removing dust, odor, mites and refreshes the clothes to its original shape colour and state. It is also possible for users to care for precious fabrics such as silk, wool and cashmere.”