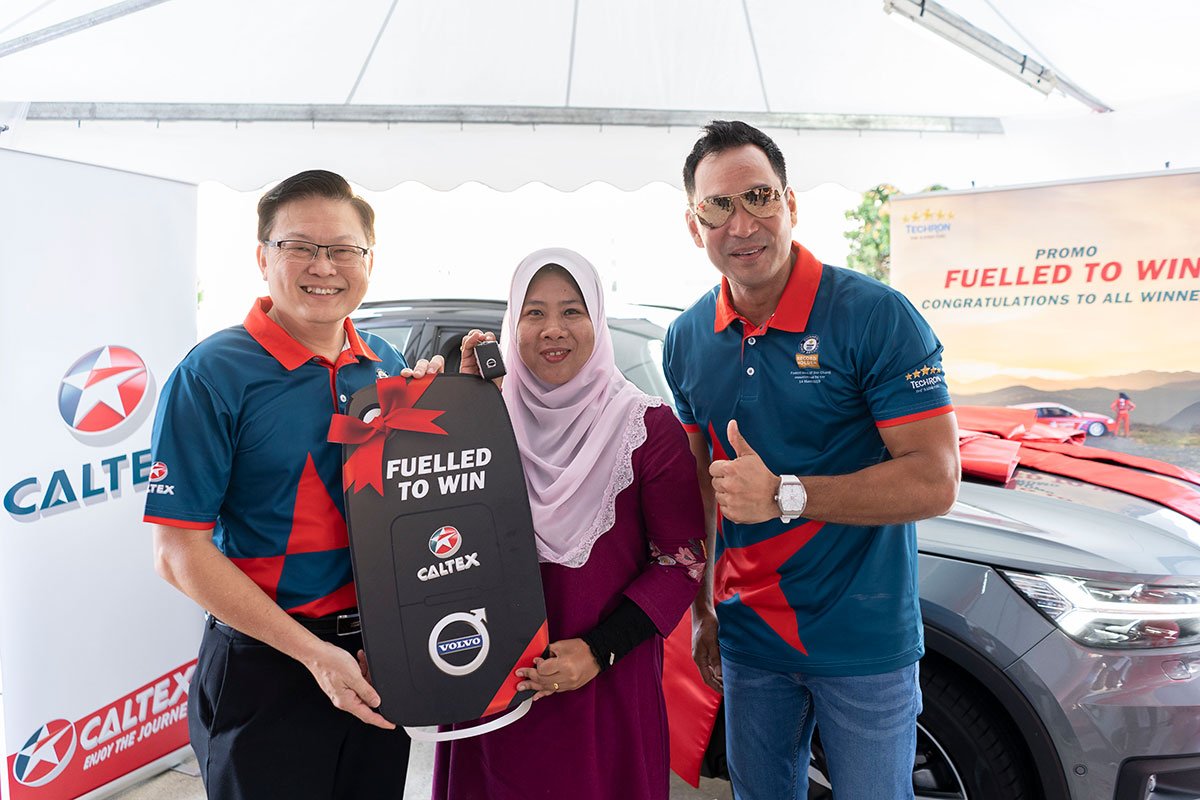 A lucky 44-year old lady drove away stylishly in her brand new luxurious compact SUV, a Volvo XC40, after winning the top spot in the Caltex Fuelled to Win Promotion from 29 July to 31 October 2019. Suhaila Sanip, hailing from Bangi, Selangor, was ecstatic over her tremendous victory of taking home the grand prize which came as a pleasant surprise to her.

She fuelled up her car with RM750 worth of Caltex with Techron® fuel over the three-month contest period with each purchase exceeding RM40 in a single receipt. As a Caltex JOURNEYTM Cardmember, Suhaila stood double the chance to win.

She received the keys to her new SUV from Mr Jeff Tan, Deputy General Manager, Chevron Malaysia Limited, at a prize presentation ceremony today at a Caltex service station near Bandar Sunway. He was accompanied on stage by Caltex Malaysia Celebrity Partner, Dato’ Hans Isaac.

“I’m totally surprised. I can’t believe all I did was fuel up my car regularly with Caltex and in return I won a new car!  How amazing is that? It was just my usual weekly routine. I hardly expected to win. It’s great timing for the year-end holidays for my family and I!” said Suhaila.

“Caltex received an overwhelming response from the public across our service stations throughout Peninsular Malaysia during the three-month contest period and this has been a testimony of the Malaysian public’s confidence in Caltex,” Jeff said. A total of 30 second prize (monthly) winners walked away with StarCash fuel cards worth RM5,000 each. The prizes were presented to them by Chevron Malaysia’s Retail District Managers, Chang Swee Wah and Faizah Abdul Samad respectively.

The Caltex Fuelled to Win Promotion is an extension of Caltex’s recent GUINNESS WORLD RECORDS® feat for the “Fastest Ascent of Doi Chang Mountain Road by Car”. For more information, visit www.caltex.com/my or the official Facebook page at www.facebook.com/Caltex.Malaysia.

The new generation of SUVs by Mercedes-Benz