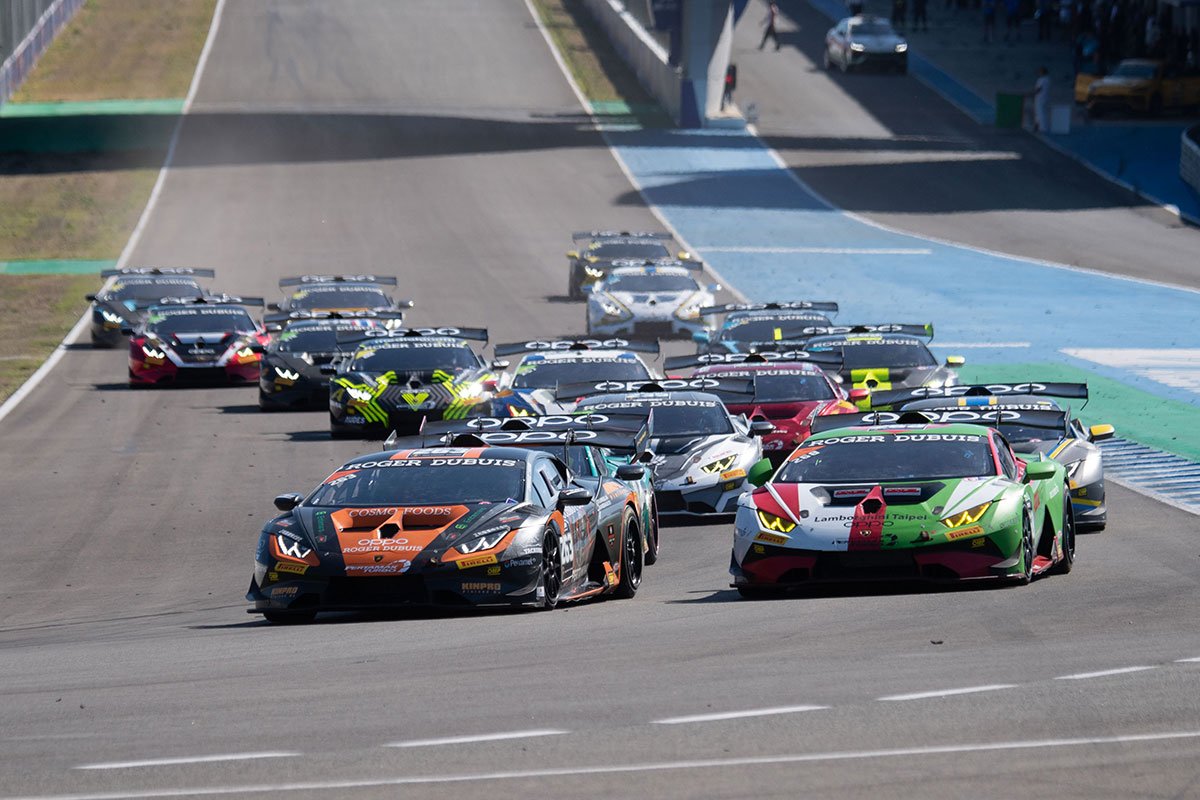 Earlier in the day, Hojust Racing’s Afiq Yazid and Toshiyuki Ochiai wrapped up the Pro-Am championship title, winning the class title in the opening race of the double-header, finishing third overall in Race 1. T Squared Racing driver Huilin Han won the Am title after a class victory in Race 1 ensured he would close the season ahead of Thai brothers Sarun and Saravut Sereethoranakul of PSC Motorsports. In the Lamborghini Cup, 852 Challengers’ Clement Li celebrated the category championship ahead of team mate Paul Wong and yh Racing Team’s Takamichi Matsuda and Dai Yoshihara, who took two class victories.

Although the 50-minute race started under the Safety Car due to oil on the track at Turn 1, when racing got underway, Nemoto led cleanly off the start, with van der Drift, Kasai and Wells behind him. Leipert Motorsport’s Brendon Leitch started from sixth on the grid but got past Lamborghini Super Trofeo Asia guest driver Emanuele Pirro to move into fifth.

As the pit window opened, both Kasai and Ochiai were among the first drivers to make their mandatory pit stops, with Kasai handing over to Puhakka, and Ochiai to Yazid, the Pro driver in their Pro-Am pairing. Puhakka got to work quickly as he attempted to narrow the gap to Chen, who had taken over driving duties from van der Drift. Yazid was also hard at work as he attempted to seal the Pro-Am title with a race to go.

With less than four minutes remaining, Puhakka had closed in on Chen and was three-tenths of a second behind his rival. But Chen expertly fended off the mounting pressure and took the chequred flag by 0.247 seconds to take the win and, critically, the Pro championship lead. Just a single point separated van der Drift and Chen from Kasai and Puhakka as the season-long battle came down to the wire Race 2 and the strategy was simple: win the race and win the championship.

Puhakka started the race from pole position, with Chen alongside. New Pro-Am champion Yazid and Au lined up on the second row, with Am champion Han and Yoshihara on the third row.

Puhakka took the lead at the start, but Chen was forced to go wide by Yazid, who moved up a place. Chen, now in third, lost critical time and by the end of the opening lap he was more than three seconds behind Puhakka. While Chen would regain the place from Yazid, the gap between Chen and Puhukka widened as the opening half of the race continued, and as the pit window opened, Puhakka had nearly a 10-second advantage.

Chen made his pit stop as soon as the pit window opened, handing over to van der Drift who immediately got to work as he hunted down Puhakka.  With both races of the Lamborghini Super Trofeo Asia season finale held together with the final races of the Lamborghini Super Trofeo North America, van der Drift had to battle plenty of traffic as he closed the gap to Puhakka, who handed over to Kasai.

With eight minutes remaining, van der Drift attempted to get past Kasai, but ran wide after making contact with Kasai. But van der Drift came back even more determined and a lap later he masterfully got past Kasai and never looked back as he sailed to the chequered flag – and the championship title – by more than six seconds. Au was third across the line and finished his Pro-Am campaign with a category win ahead of Yazid, and Leipert Motorsport’s Philip Kadoorie and Dan Wells. Just out of the top five overall and sealing his Am championship title with an Am class victory was Han, while Matsuda was first in the Lamborghini Cup.

The Lamborghini Super Trofeo World Final will be available to watch via a live stream on the official Lamborghini Squadra Corse Facebook and YouTube channels and at:
squadracorse.lamborghini.com. Chris van der Drift, #268, Gama Racing, Pro Champion
“The start was all about Evan staying as close as he could to Puhakka. He got pushed wide into the gravel, so it was sort of tough from there. He dropped back 10 seconds and I thought oh this is going to be very interesting. All the traffic probably makes it more interesting than anything else so I knew that I just needed to push like hell. Kasai defended me well, he pushed me off so fair play to him but I just caught him up, had a lunge at another set of cars and then that was see you later.

Thanks to Evan for asking me to come and join him this year and having a Pro line-up is really nice to. My first time really having a driver having a similar speed to me so we had some cool racing. For me the first time in the Lamborghini too so great to come and win my first year out. It hasn’t been easy for us. I enjoy it and it’s getting better and better, the more I drive with it.”

Evan Chen, #268, Gama Racing, Pro Champion
“It was a mess at the start, I got pushed wide and then I just tried to play catch-up. Chris saved a bit of energy from Race 1, so I let the work go to Chris. Finally he got past Kasai; it was nail-biting. I was really nervous but eventually we have redemption.

“[This season] was quite similar to last year. We were down by two, but last year we weren’t as lucky. So this year was like a redemption.” Afiq Yazid, #238 Hojust Racing, Pro Am Champion and Pro-Am winner, Round 6, Race 1:
“For today’s race we are happy, the team is happy with the performance. We struggled a lot this week, we struggled to find the set-up, but yesterday, the last session of testing, we sat down with the team and talked a lot about the car and today we managed to improve the car. We still need to work a little bit on the car for this afternoon and for the World Final.”

Alex Au, #266 Vincenzo Sospiri Racing and Pro-Am winner, Round 6, Race 2:
“The start was pretty messy. I had a clean start, but after Turn 1 the cars in front were fighting each other, there were bits on the road, so I was just avoiding things but then the two cars behind me took advantage and caught me in the first corner. I was stuck behind another car for five or six laps, and then after I got past, I built my pace. Yuki did a fantastic job, he did very clean laps. We are Pro-Am first so that’s a good feeling.”

Yuki Nemoto, #266 Vincenzo Sospiri Racing and Pro-Am winner, Round 6, Race 2:
“It feels great [to win]. I crashed the car in Korea and we had to miss the Shanghai round so I’m so happy to race here. The first race was not so good, but the second race was great. I’m very happy for the team.” Huilin Han, #239 T Squared Racing, Am Champion
“[Race 2] was good, no pressure because the champion was closed in the last race so I could push all the way. It was fun. It’s been great, fantastic racing here this weekend. It’s a great season, so far the best I’ve ever done – the level of competition, you can see how far or how close you are to the Pro drivers which I think is important for any driver so you can see how you can improve.”

Takamichi Matsuda, #230, yh Racing Team, Round 6, Race 2 Lamborghini Cup winners:
“I knew that the car in second place behind us was quicker than us in qualifying so there was so much pressure. But I enjoyed the pressure and the feeling and to come ahead was a great feeling. It was a great partnership this season with Dai and Lamborghini gave us a great opportunity to meet each other.”

Dai Yoshihara, #230, yh Racing Team, Round 6, Race 2 Lamborghini Cup winner:
“I kind of had a mistake on the start and I got a little behind so I wanted to just get the same position back. I was able to overtake 2-3 cars and then passed it to Matsuda-san and he almost had an 18-second advantage and then he just kept the gap. It was a really nice.”