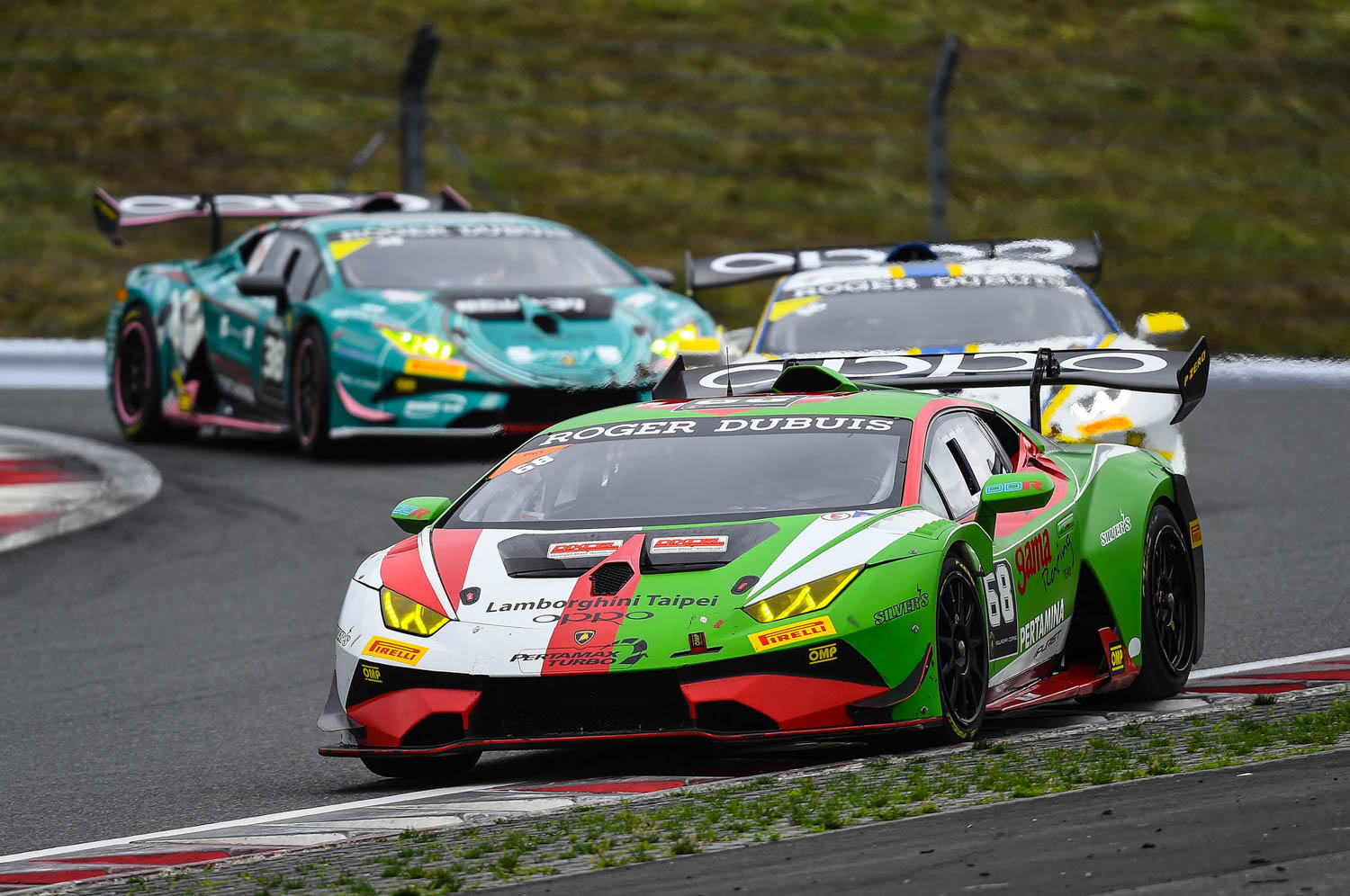 Japan. (July 6 2019) – Gama Racing’s Chris van der Drift and Evan Chen took the overall and Pro wins from pole in the opening race for Round 3 of the Lamborghini Super Trofeo Asia at Japan’s 4.563km Fuji Speedway today, narrowing the gap on the Pro leaderboard to title rivals Juuso Puhakka and Takashi Kasai of FFF Racing Team to just a single point.As the clouds rolled dramatically over Japan’s majestic Mount Fuji, Hojust Racing’s Afiq Yazid and Toshiyuki Ochiai crossed the line second overall ahead of Puhakka and Kasai, taking their first Pro-Am victory of the season in the process after a strong outing which saw the pair push every inch of the 29-lap race. Second in the hotly-contested class were Alex Au and Yuki Nemoto of Vincenzo Sospiri Racing, their points haul ensuring Au remains at the top of the class leaderboard, albeit with a margin of – once again – just a single point. Taking the final Pro-Am podium place were the D1 Racing Team pairing of 2019 season debutants Henry Kwong and Max Wiser.FFF Racing Team’s Steven Lin, driving solo, crossed the line first of the Am runners after snatching the lead in the closing moments of the 50-minute race from Promotion Racing’s Satoshi Furuta and Jun Tashiro. However, Lin was later handed a 30-second penalty for a late-race contact with his rivals. That gave the Promotion Racing pair a well-deserved Am victory from the PSC Motorsports Thai brothers Sarun and Saravut Sereethoranakul, with fellow Thai Bobby Buncharoen of True Visions Motorsport in third.

The 852 Challengers duo of Paul Wong and Clement Li claimed their fourth Lamborghini Cup victory in five races, strengthening their position at the top of the leaderboard. Second were yh Racing Team’s Takamichi Matsuda and Daijiro Yoshihara, with GDL Racing’s Gabriele Murroni in third. However, after the field was released, the younger Kiwi was dropped to the back of the pack after early-race contact with fourth-row starter Richard Muscat of GDL Racing, before embarking upon an epic comeback. Fellow countryman van der Drift, meanwhile, made a wheel-perfect getaway to pull clear of his rivals, chased by Nemoto, Yazid and Pro rival Puhakka, with a flying Tashiro in fifth overall and leading the Am field.

In the Lamborghini Cup, Wong quickly snatched the lead from pole-sitter Murroni at the start. While the 852 Challengers were to maintain the lead to the flag, an unlucky Murroni was passed by Yoshihara in the closing minutes of the race.

As van der Drift masterfully controlled the race, the leading trio were covered by just a single second, all three maintaining an incredible pace.

Further down the order, Aylezo Motorsports’ Zen Low came under fire from Am rival, T Squared Racing’s Huilin Han. The pair made contact, with Low slowing to a halt on track as a result, and Han retiring into the pits.

As the minutes ticked away towards the driver changeover, Yazid finally reeled in Nemoto, passing him on lap 11 just before the pit window opened. Van der Drift continued to push as hard as he dared in order to hand Chen the maximum breathing space at the changeover, but it was Yazid who stayed out an extra lap before handing the wheel to Ochiai.

Leitch, meanwhile, had pulled off an epic comeback to plough back up through the order and up to seventh by the time he handed over to Massimo Vignali.

A crucial moment in the race came when Ochiai emerged from the pits to find himself two abreast with Chen. Chen held his nerve – and the race lead – managing to pull an impressive gap of more than a second from the Japanese driver by the end of the lap. As Chen roared away in the lead pursued by Ochiai, Kasai closed up and passed Au to go third overall.

There was frustration for Danny Stutterd, who had taken over the GDL Racing car from Muscat, who was forced to pit with a puncture, rejoining the race and crossing the line in 16th.

As the final minutes counted down, the intensity of battle only increased.

With just over a minute remaining, contact at Turn 1 between Lin and Futura tipped the #77 car into a spin. As Chen increased his margin at the front of the field, Ochiai began dropping back, falling into the clutches of Kasai. The Hojust Racing ace held on though, claiming the Pro-Am victory and finishing second overall, less than a second clear of the FFF Racing Team Pro duo.

The Lamborghini Super Trofeo Asia continues on Sunday, July 7, with Race 6 getting underway at 10:10 local time (GMT+9). D1 Racing Team’s Pro-Am pair Kwong and Wiser will start from pole position, with Nemoto and Au joining them on the front row of the grid. Van der Drift and Chen start from the fourth row with Pro rivals Puhakka and Kasai alongside. Chris van der Drift, #68 Gama Racing, Pro Winner, Round 3, Race 1
“I had to make sure no one got me at the start. Brendon tried real hard to go real deep, but I knew he was going to go way too late. I was really late but he was way later than me, so I knew there was no chance. He went a bit wide and I made the corner. I just saw how the other guys were mainly, saw how the car evolved and developed, and keep the rear tyres good for Evan so if we needed anything later on he could push a bit hard. I managed the gap and made sure I didn’t do any stuff ups. I don’t know where we lost a little bit of time as Evan had to battle to get past them again on his out lap.”

Evan Chen #68 Gama Racing, Pro Winner, Round 3, Race 1
“It wasn’t that easy, especially when Chris left such a tight gap for me. I really had to jump on the brakes when Ochiai came out. That was quite crucial because he was really fast as well. It’s quite hard to pull away, so I couldn’t imagine getting stuck behind him. I knew I had to jump on the brakes, so it was either flying off or passing him. Luckily, I passed him and didn’t fly off! In the end, we pulled away anyway, so it was good as we’re pretty consistent with the car and the tyres.” Afiq Yazid #38 Hojust Racing, Pro-Am Winner, Round 3, Race 1
“Our first win after two rounds – we’ve been waiting to win a race and at last in Fuji we won! We’ve had a tough week actually; a tough qualifying because I was using the wet tyres and then the track was drying towards the end and then we ended up P4 in [qualifying]. My partner [Ochiai] had traffic towards the end when he did his best lap. Today was about team work – we needed to push until the end. We have one more race tomorrow so we’ll see how it goes. Today, we had a better car for sure – better than in Suzuka, than in Sepang. We worked very hard with the set-up because VSR is not an easy team to beat, they are very competitive and we needed to work hard for this weekend and finally we found a set-up for today’s race and hopefully tomorrow the set-up will work again.” Jun Tashiro #77 Promotion Racing, Am Winner, Round 3, Race 1
“The set-up of the car is improving and when the tyres are fresh we’re doing well, but as the tyres wore out we were losing position, although we somehow managed to maintain. There was some contact between my partner and the #6 car – as I was watching I saw quite a battle, but somehow, we managed to come back. We’re very happy today and wish the same for tomorrow.” Paul Wong #44 852 Challengers, Lamborghini Cup Winner, Round 3, Race 1
“It was a very good start. I was able to lead the field before handing over to my partner [Clement Li] and he held the lead until he crossed the line. We did a good job. I enjoyed it a lot. It’s very exciting. I’m satisfied with my performance so far and hope we will continue to win and challenge at the World Final.”