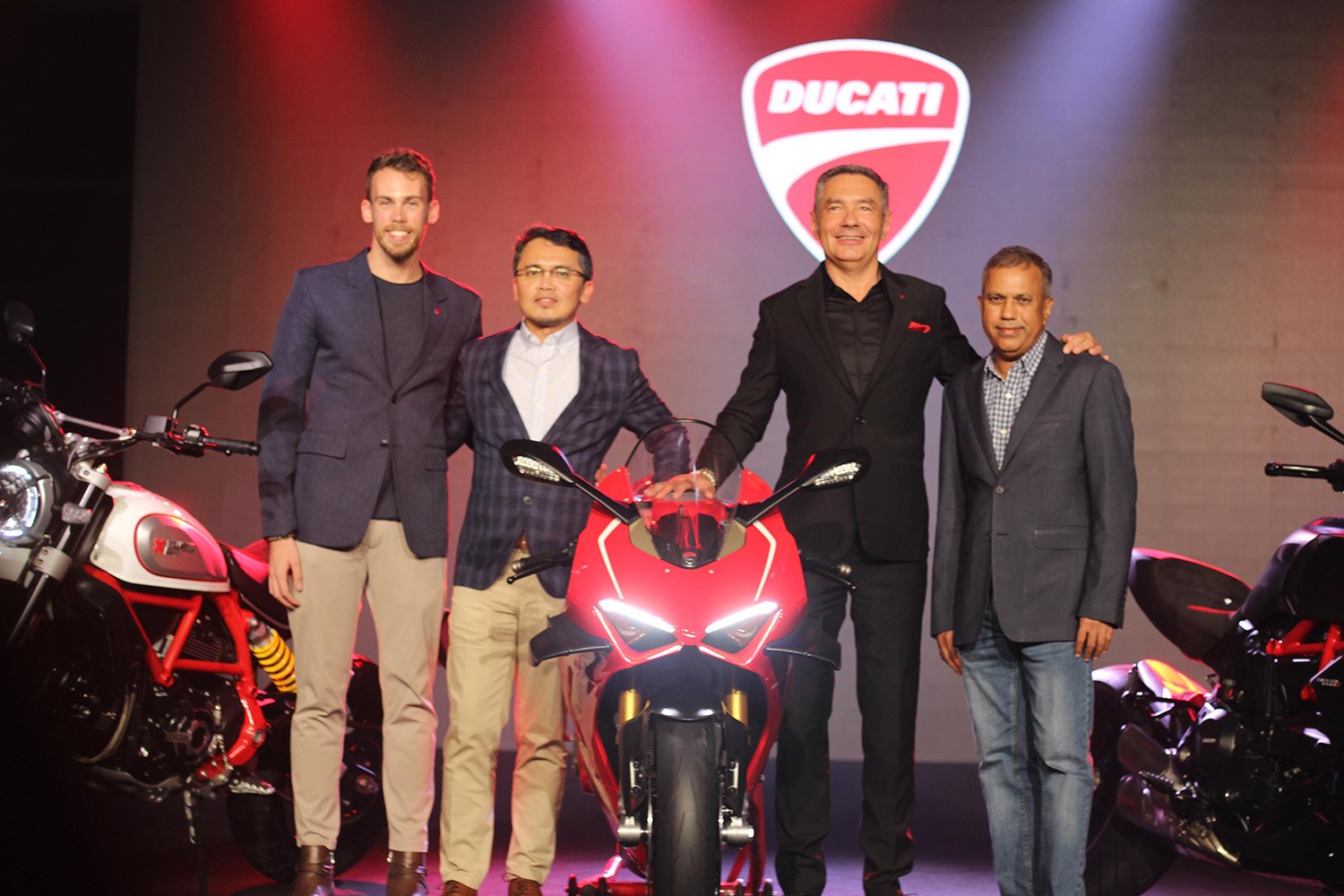 “As the epitome of all-Italian Excellence, the Ducati brand offers a wide range of state-of-the-art bikes crafted to perfection based on the Ducati core values of Style, Sophistication and Performance. Among the nine Ducati bikes being launched today include Malaysian Ducati fan favourites Hypermotard 950 and Scrambler® Café Racer. With this massive line-up, we are confident that we will achieve our 2019 sales target of over 300 bikes this year,” said SM Nasarudin SM Nasimuddin, Group Executive Chairman & Group CEO, Naza Corporation Holdings Sdn Bhd. Enthralling the interests of bike enthusiasts at EICMA 2018, the ultimate road-legal Ducati race bike Panigale V4 R bagged the title of the ‘best-looking bike of EICMA 2018’. Born to Run, the bike constitutes the technical platform for the official Ducati Superbikes that will compete in the 2019 Superbike World Championship season. Fuelled by pure racing adrenaline, the Panigale V4 R is the maximum expression of Ducati’s racing DNA that accompanies the rider towards a dimension of advanced riding, made up of curves and straights that run incredibly fast.

In this latest version of the superbike, its Desmosedici Stradale 1103 cm3 engine has been replaced with the 998 cm3 Desmosedici Stradale R engine to comply with displacement limits set by Superbike World Championship (WSBK) rules, offering extreme performance designed for the track. In fact, the Ducati Panigale V4 R is the most powerful factory motorcycle ever built by Ducati to date.

The Ducati Panigale V4R was made for Malaysians who live for speed and the adrenaline rush. Designed to elicit a symphony of emotions, the bike also features a dry clutch which greatly improves ‘rider feel’ during braking and manoeuvring through the corners while prioritising the safety and ease of riding, regardless of the rider’s experience level. Another impressive bike joining the 2019 line-up is the scene-stealer Ducati Diavel 1260 S which was exclusively introduced to the Desmo Riders Club Malaysia (DOCM) through a sneak preview event in May 2019. Unconventional, unique and absolutely unmistakable, the Diavel 1260 S stuns with its personality, design, sport naked handling and thoroughbred engine.

Powerful, muscular, agile and effective between the curves for maximum riding enjoyment, the second-generation Diavel 1260 S combines the performance of a maxi-naked with the ergonomics of a muscle cruiser. The stunning new bike draws on its key styling element with a contemporary slant while offering more assertive outlines and higher performance perfect for Malaysian urbanites who love being at the centre of attention.

Built around the Testastretta DVT 1262 engine, the bike is capable of delivering 159 hp at 9,500 rpm and 129 Nm acceleration with a low-rev smoothness ideal for everyday riding or touring. The Diavel 1260 S is also equipped with an upgraded chassis set-up which makes the bike more responsive on mixed-road routes while top-drawer technology and electronics provide braking performance on par with that of a sport bike without compromising its safety with Bosch Cornering ABS and user-friendly engine performance control. Its sophisticated yet muscular design and state-of-the-art innovation also won the prestigious “Red Dot Award 2019: Best of the Best” title.

Additionally, the sporty Diavel 1260 S features a fully adjustable Öhlins suspension at both front and rear dedicated wheels, and an even higher-performance braking system. It also mounts Ducati Quick Shift up & down (DQS) as standard to allow clutch-less shifting. Embodying the roots of competition, motard style without sacrificing its sporty essence, the aggressive and fearless Hypermotard 950 is now racier, more adrenaline-packed and rider-friendly. Given a whole new look, the Ducati ‘fun bike’ takes its cue from the supermotard race world with completely overhauled ergonomics and an ultra-advanced chassis set-up and electronics package.

The new Hypermotard was made for Malaysians who live life on the edge, fitted with a wide handlebar, narrow sides and is 4kg lighter than its predecessor for greater agility when changing directions. Powering the Hypermotard 950 is a renewed 937 cm3 twin-cylinder Testastretta 11˚ with more muscle, greater pulling power and new electronics to ensure smoother control. Achieving 114 hp at 9,000 rpm and a flat torque curve peaking at 9.8 kgm at 7,250 rpm, the engine is perfect for ultimate on-track sports fun, twisting country roads and everyday urban roads alike.

Prioritising the comfort of its rider, the superbike’s seat is ergonomically redesigned to feature a flat, extended profile with a moderate bulge in the passenger area to ensure smoother movement during riding. Made for the adventurous rider with the passion for riding on off-road conditions, the new Multistrada 1260 Enduro expands the concept of adventure with new Ducati Testastretta DVT engine which ensures outstanding pulling power right from the low-to-mid rev range. The Desmodromic Variable Timing (DVT) system optimises performance and fluidity of delivery at all end speed levels. Achieving a torque of 4,000 rpm, the Multistrada 1260 Enduro is the motorcycle with the highest torque in its category. The powerful superbike also comes standard with Ducati Quick Shift Up & Down (DQS) which allows the rider to shift gear without using the clutch for superior riding pleasure, greater ease handling off-road trails and a more relaxing ride in the city.

For the peace of mind of the rider, the new Multistrada 1260 Enduro is equipped with the most advanced Ducati technology safety features including the Bosch Cornering ABS which maximises active safety even when leaning into curves, Ducati Traction Control, Ride by Wire, Ducati Wheelie Control and semi-active Ducati Skyhook Suspensions (DSS) Evolution for unprecedented versatility. Joining the 2019 line-up is upgraded Multistrada 950 S, so the rider can experience the beauty of the journey every day, thanks to the mix of Ducati riding emotions and versatility that make it ideal for every use. Designed to make it safer and even more enjoyable, the versatile bike is now enhanced with a 6-axis Bosch IMU (Inertial Measurement Unit), Bosch Cornering ABS, Vehicle Hold Control (VHC) for easier uphill starts and a hydraulic clutch.

For the first time, the Multistrada 950 is now available in the S version, donning the most advanced technology, performance and comfort. Super-technological and full-featured, the rider can enjoy sheer riding pleasure as the brand’s smallest “multibike” is fitted with the Ducati Skyhook Suspension (DSS) system which continuously adjusts fork and shock absorber damping so the suspension responds instantaneously to changes on the road. Ducati Quick Shift up & down (DQS) is also available on the bike to allow clutch-less upshifting and downshifting, and the bike also features a full-LED headlight, 5” colour TFT display, a Hands-Free System, Cruise Control and backlit switchgear controls, and an upgraded rider-bike interface (HMI) which is more user-friendly than ever. Its indicators also feature an auto-off function that takes into account both lean angle and distance travelled. This year’s exciting line-up sees the first major overhaul of the entire Scrambler® range since its inception. Nonconformist, affordable and essential, the Scrambler® range is engineered with the perfect blend of tradition and innovation, with the 2019 versions being more contemporary, more comfortable and safer while ensuring even more carefree ‘Land of Joy’ fun, while retaining the pure essence of motorcycling.

Consisting of four carefree bikes; Scrambler® Icon, Scrambler® Full Throttle, Scrambler® Desert Sled and Scrambler® Café Racer, this year’s line-up sees several feature upgrades including all-new headlights with LED DRL (Daytime Running light) and automatic LED indicators which boosts bike visibility in traffic, even during the day. For the riders’ peace of mind, the 2019 Scrambler® bike range comes complete with the New Bosch Cornering ABS safety feature, exclusive for this vehicle category, which maximises active safety during braking, and for added comfort the seats of the respective bikes have been redesigned to provide the ultimate riding experience.

Perfect for the Malaysian urbanite youths always on the go, the new Scrambler® line is installed with the Ducati Multimedia System which allows the rider to ride in the company of his or her favourite music, answer incoming calls or chat with the passenger on the intercom. Adding to its convenience, the superbike also has new switchgears specially designed for the rider to easily scroll the LCD instrument menu which now displays the bike’s fuel level info as well.

Each of the new bikes in the 2019 Scrambler® line-up have also been enhanced in terms of style, wheels and bike settings respectively, including the Scrambler® Icon’s Yellow and new trendy Atomic Tangerine colour, the Café Racer’s new graphics inspired by the 125 GP Desmo and aluminium handlebar with 60’s racing-style bar end mirrors, the new black and yellow colour scheme with dedicated logo and sporty white border on the Full Throttle, as well as the upgraded Pirelli SCORPIONTM RALLY ST Tyres that ensures the right balance between off-road and endure street performance on the Desert Sled. The unveiling of 9 powerful and superior bikes at the Ducati Malaysia Premiere 2019 at Naza Automall PJ.