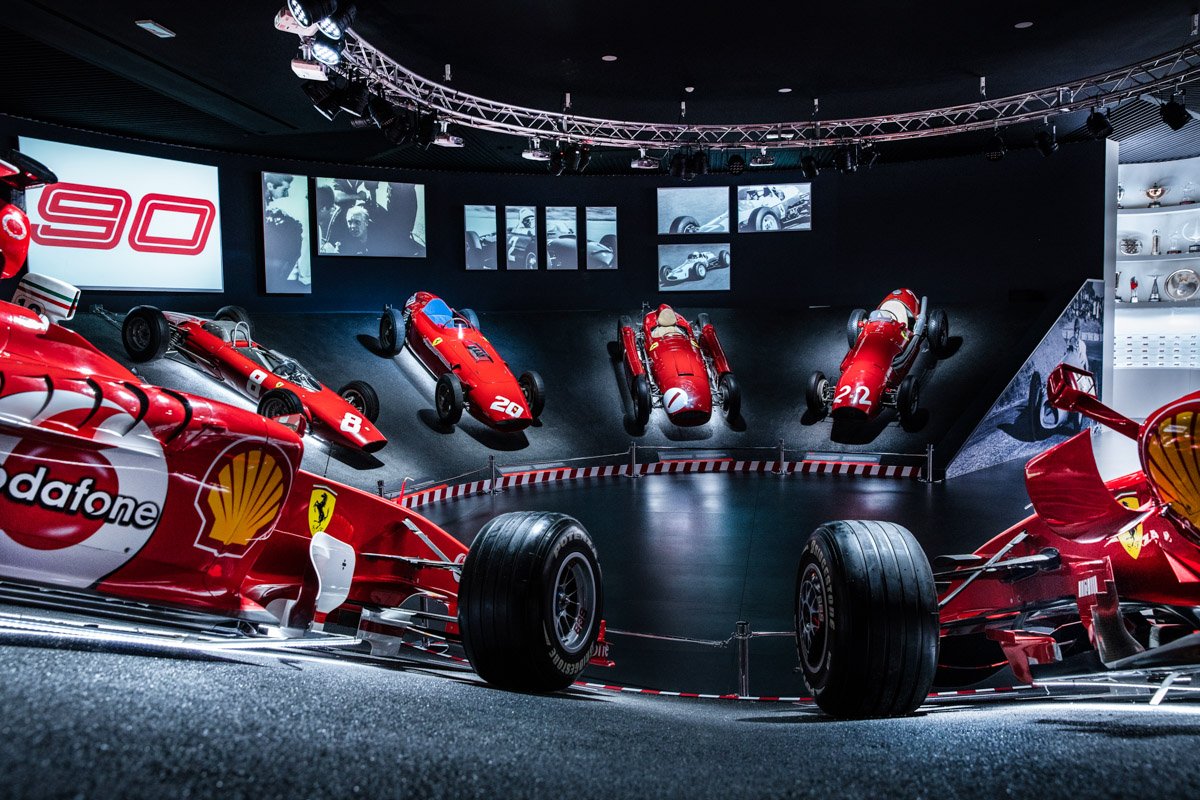 Maranello, 5 June 2019 – One of the great iconic names in motorsport with the power to unite an entire country and millions of fans from all over the world: the Scuderia Ferrari – the most successful team in the history of Formula 1 – turns 90 in 2019. An anniversary that the Ferrari Museum in Maranello has decided to mark with a major celebratory exhibition.

Founded in Modena on 16 November 1929 by Enzo Ferrari who understood the potential of gentlemen drivers to deliver great racing performances, Scuderia Ferrari has written many of the most unforgettable chapters in motorsport. The team which began using Alfa Romeo cars was first known as Società Anonima Scuderia Ferrari. It quickly sped to prominence on both the Italian and world stages, rapidly entrusting its cars to the leading drivers of the day in categories of all kinds. These included the Mille Miglia, the very first event for Scuderia Ferrari in 1930, followed by the Targa Florio, the Trieste-Opicina hillclimb where Tazio Nuvolari gave the marque its first ever win and classic endurance races like the 24 Hour races at Le Mans, Daytona, Spa and the Sebring 12 Hours, and, of course, Formula 1. The cars featured in the “90 Years” exhibition are a testament to that glorious history, beginning with the Alfa Romeo 8C 2300 Spider, which became the very first car to sport the Prancing Horse as part of its livery at Le Mans in 1932. The final car of the exhibition is the SF71H: the single-seater in which Sebastian Vettel and Kimi Räikkönen raced in only last season.

In the exhibition, the timeframe separating these two cars is filled with a string of unforgettable single-seaters, the stars of hard-fought races, crushing defeats and historic victories alike. The Ferrari 500 F2, in which Alberto Ascari won two world titles in a row in 1952 and 1953, and the Ferrari D50 that Juan Manuel Fangio drove to take the fourth of his five world titles. Also featured is the Ferrari Dino 246 F1 that helped Mike Hawthorn beat Stirling Moss to the World Champion crown by a single point. The series continues with the Ferrari 156 F1 which gave John Surtees in 1963, the only man to be world champion on two and four wheels, his first win. Also on show are the 1975 312 T with its revolutionary transverse gearbox which helped a young Niki Lauda to win his first World Championship, and the 312 T4 driven by Gilles Villeneuve, the same model in which Jody Scheckter won in 1979. Jody Scheckter took the Drivers’ title in 1979. Not to be missed is the Ferrari F2004, the car in which Michael Schumacher delivered 13 wins – including six consecutive ones – to take his final World Champion title in 2004. Scrolling down the long list a little further, is the F2007, in which Kimi Räikkönen brought the Drivers’ title back down to Maranello, after an epic race to win in Brazil, snatching the title by a single point.

All of these cars brilliantly encapsulate and epitomise Enzo Ferrari’s dream, and the commitment, determination and passion for innovation of the most successful team in the history of Formula 1. Its tally of 31 World titles (15 Drivers’ and 16 Constructors’) is an unequalled record that the Maranello team continues to defend and honour each season with the same passion of 90 years ago. The Maranello Museum is also staging the glorious “Hypercars” exhibition dedicated to all the Ferraris that signalled landmark advances in the marque’s technological evolution.

Every Ferrari is special and the preserve of the lucky few who become clients. Many Prancing Horse models have been the catalyst for constant innovation and accelerated technological progress that have set new benchmarks in the sector. This is the Maranello signature when it comes to its Hypercars, a term that refers to milestones in motoring history. These cars are all limited series and the product of Enzo Ferrari’s personal philosophy of aiming to make every new model the best car of its day. The result is that each new, more advanced addition is the embodiment of genuinely leading-edge research, setting the benchmark in the automobile world. This exhibition now offers visitors the opportunity to view just such examples of Ferrari technological excellence.

First off is the 1984 GTO, an iconic car clothed in aggressive yet elegant lines designed to revive the legendary Gran Turismo Omologato moniker, inherited from the 250 GTO. Three years later, however, Ferrari unveiled the mother of all modern Hypercars: the F40. Created as Enzo Ferrari’s personal celebration of the company’s 40th anniversary, the F40 is a genuine track car with all the consequent blistering power and performance that can be expected, thanks to the turbo engine and the use of composites with dominated F1 at that time.

In 1995, Ferrari ushered in a whole new era with the F50, essentially a Formula 1 car in GT clothing. For the first time too, the engine, which was derived from the 1990 F1 car, was bolted directly to the monocoque chassis as a stressed member. An awe-inspiring car that delivered authentic track-style ground effect thanks to over 2,000 hours of wind tunnel work. The 2002 Ferrari Enzo, the hypercar dedicated to the founder and developed in consultation with Michael Schumacher, was the very pinnacle of road-going achievement of its day. Inspired by the Ferrari single-seater, it featured a particularly innovative human-machine interface which saw a series of controls moved to the steering wheel at the specific behest of the German world champion.  These included the forebear of the legendary Manettino, which would later appear on all the cars in the range.

Unveiled to the world in 2013 as its name implies the LaFerrari is the quintessence of a car produced by the Maranello brand. It was also the first Ferrari to sport a hybrid HY-KERS power unit inspired by the new generation Formula 1 cars, which unleashed just short of 1,000 horsepower. The targa-top version, the LaFerrari Aperta, was unveiled in 2016 and as a result of some superb aerodynamic work is just as efficient as its coupé sibling when its windows are up. Also at the exhibition the design static model of Ferrari P80/C, the latest product of our One-Off programme which allows owners to create a truly unique version of an existing model, moulded around their personal wishes.  Presented last April after four years of research and development, the P80/C is the only One-Off in Maranello history to be homologated solely for track use. Based on the Ferrari 488 GT3, it is a hugely sophisticated reworking of the concept behind the Sports Prototypes that has proved so successful in competition over the years.

As part of the journey through Ferrari’s signature exclusivity visitors also discover the Tailor Made programme through which the marque gives full expression to the soul of this super premium luxury brand. An entire room in the Museum has been fitted out to replicate the area in the Ferrari Style Centre where Ferrari’s most discerning clients go to personalise their cars. Colour palettes, fabric swatches, leather samples and a myriad of other materials offer a literally endless choice of combinations to allow clients to make their Ferrari as unique as their own personality and tastes.

The “90 Years” and “Hypercars” exhibitions are both running until May 2020.

FERRARI TAKES THE RED DOT: BEST OF THE BEST AWARD FOR THE MONZA SP1