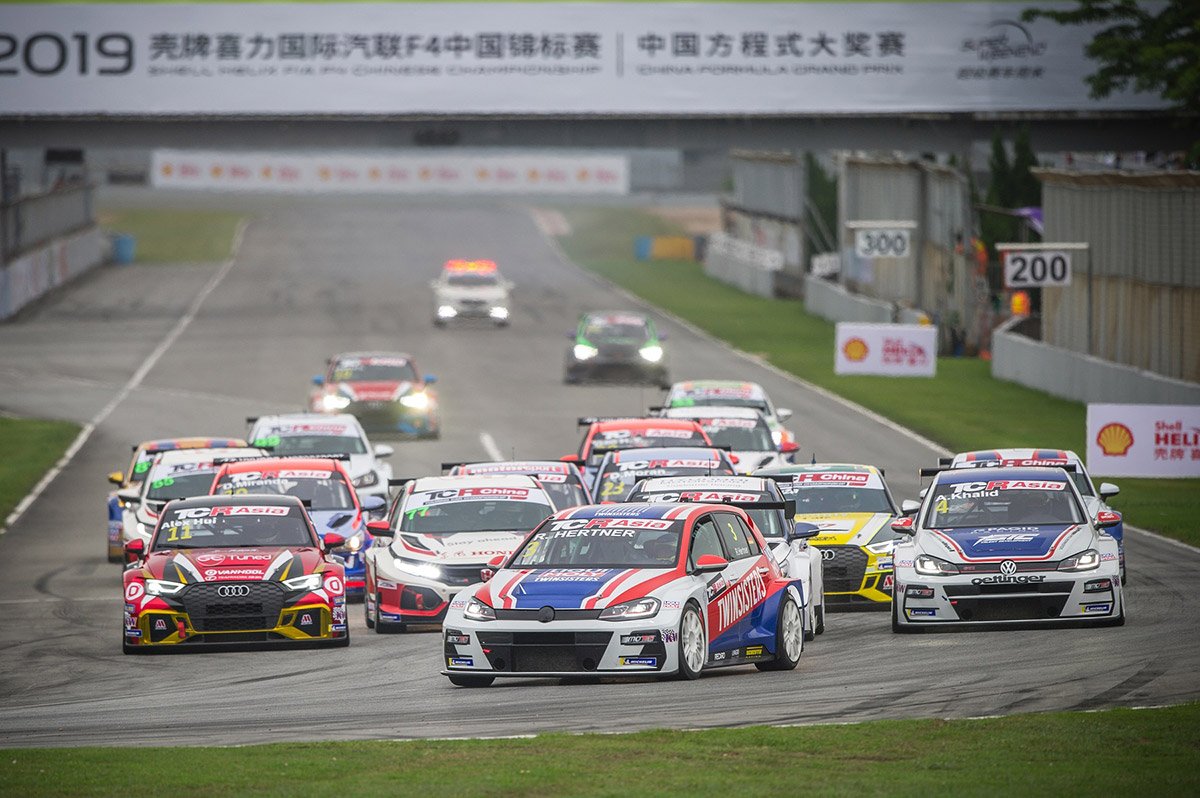 China. 4th May 2019 – German gentleman driver Roland Hertner leaves Zhuhai International
Circuit after TCR Asia Series Round 4 with a healthy 17 points lead in the Cup
Championship. Hertner was on a strong drive when weather got the best of him in the
afternoon race,
It was a promising start for both Hertner and Adam Khalid as they lined their Volkswagen
Golf GTi TCR at the front of the field but the weather proved to be the worst adversary,
leaving the track slippery as it drizzled throughout, catching many drivers off guard and
ending their races on the gravel.

Both Hertner and Khalid had solid clean starts, Hertner managed to claim the lead for a
while before a small mistake caused him to be the first casualty of the day. “It was a difficult
start but I managed to get in front. The conditions were good and the car was perfect but I
did a small mistake out of the first lap and got into the gravel which allowed some cars to
pass me.

“I managed to recover from that and as I tried to catch back up to the front the conditions
were very strange, it was slippery and it was drizzling and I made another mistake that
caused me to spin into the gravel. After that, there was no chance to continue the race. I am
disappointed with how the weekend ended but I am looking to make it up in Shanghai”.
The young Malaysian driver from the Sepang International Circuit Talent Development
Program, looked good for a top five finish. Khalid had a strong drive at the start, following the
leading pack, then as the Safety Car pulled in for the second time and the race resumed,
Khalid was once again chasing for fourth but his race was cut short after being sideswiped
by the car running slightly behind him.

“The start was amazing! The car felt great, the handling was on point and all the way until
the last four laps we were up to P5 and I think P4 was possible, the car was that amazing.
Then disaster. Unfortunately there was a restart, it was raining and it was wet into turn 1 and
obviously a little bit of bumping from the drivers behind and I went off slightly. As I was about
to rejoin the race, there was a big impact on the right side of my car. I did try to rejoin the
race after the impact but there was just no way to continue. The car had to retire.
“It was an unfortunate race really. I am sorry to everyone, not just the team but the sponsors
as well. I will go home and place full focus on Shanghai in the next rounds and I will assure
you that there will be good results in Shanghai” ended Khalild.

Volkswagen Team Oettinger Team Manager, Kurt Treml looked on the positives as well as
ahead to the next outing in Shanghai. “Well we started the weekend very optimistic with how
the races in Zhuhai would turn out. In the Qualifying we managed to get both cars in top 10
and we realised that our big chance will be in the second race with the reverse grid. Roland
would start in the first row and Adam directly behind him in 4th. Unfortunately it was not a
lucky weekend for us and we could not score any points in race 2.

“It is always difficult to run together with another race Series, this time was with TCR China.
There were more cars on the grid and things are bound to happen. I am not blaming them
but in the end we suffered a big damage with Adam’s car and it was avoidable.

“As for Roland, yes he did make a mistake, a small one today but with a high price to pay.
On the good side, he still leads the Cup Championship as we prepare for Shanghai.

“As for Adam, in both races it was not his fault. He could not have avoided contact and in the
second race, it was a bad one that caused big damage to his car. It’s hard to see him not
able to score any points this weekend”.

The team is looking forward to making up for the results of today, putting Zhuhai behind
them and focus on the next race at the Shanghai International Circuit this 31st May to 2nd
June.