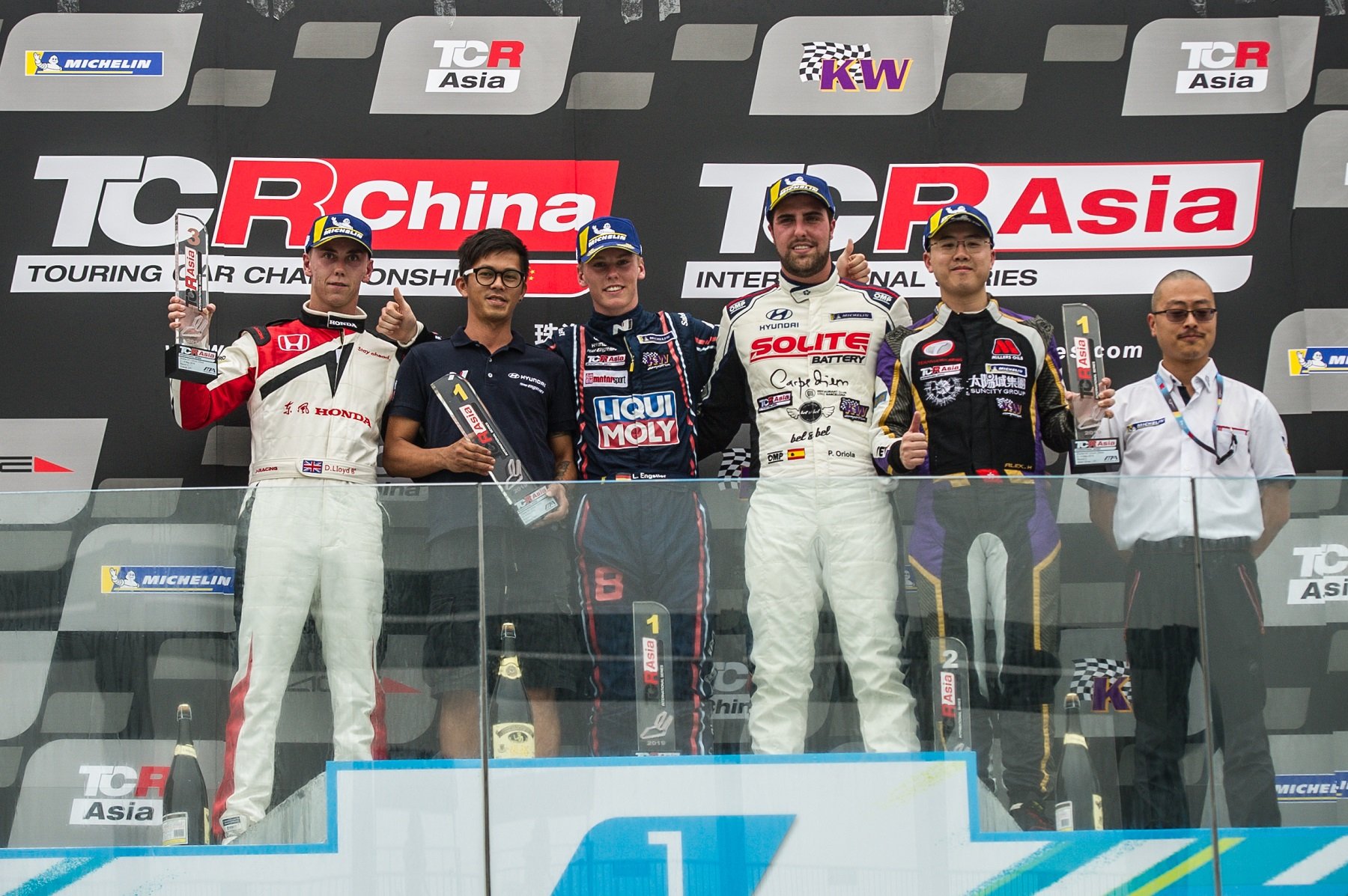 It was another outstanding race outing for LIQUI MOLY Team Engstler with a perfect pole-to-flag win from 19-year old Luca Engstler and a fourth placed TCR Asia finish for Diego Moran, to continue to lead the Team and Driver Championships.
Engstler set the pace from the Qualifying session all the way to a perfect Round 3 TCR Asia Series win at Zhuhai International Circuit. The German driver brought the car across the line safely in first despite a last minute Safety Car deployment towards the end of the race.

His teammate, Diego Moran, is experiencing his first race in LIQUI MOLY Team Engstler’s Hyundai i30 N TCR and was super impressive during the Qualifying and at the start of the race. The Ecuadorian was unable to maintain his pace as he was plagued with brake issues a few laps after the start of the race. In the end, despite the problems, he brought the car back safely 7th overall, collecting vital points for the Championship.

Engstler set the fastest time of the day on lap 3, clocking a Qualifying worthy race pace of 1:44.159. “Race 1 was quite good, I managed to challenge Diego down the straight into turn 1 so I was in P1 after turn 1. From there I knew I had to push really hard to build a gap so that I can control the race which happened quite well. So I could build a gap and I saw Pepe is second so I tried to stay focused and not make any mistakes and to take it easy. I also saw that the tyres were dropping quickly and the brakes were not so good so I knew that I had to be very patient and not make any mistakes which happened quite well”.

For Moran, his first race in the Hyundai did not go as planned but he knows that he has the pace to finish on the podium. “Well, I am happy with my pace in Qualifying for sure but then in the race things did not go so well for me. I lost power on the brakes from the beginning of the race and then with more temperature I lost even more power on the brakes which was really hard and that’s why I lost so many positions and I had to give up a lot of pace. Anyhow in the end I managed to stay out of trouble and bring the car home with some points for the Championship, which is always important. Now we are focusing on race 2 tomorrow. For sure the team will be able to fix the problem and we will fight back tomorrow… Tomorrow is another day”.

Engstler and the team dedicates their win to a vital member of the team, “I am really happy, really happy for the team. This victory is for Alvin, our crewmember who is still in the hospital and we are always thinking of him and we all hope that he will feel better soon.”

LIQUI MOLY Team Engstler Project Manager, Andreas Klinge agrees with the sentiment and sums up the day. “A good day for us. Perfect day for Luca – pole position and race victory. Diego made a good qualifying as well and it is his first time in the Hyundai, welcome to him once again, really proud to have him in the team. A well deserved P2 in qualifying.
“Unfortunately the race was not as well for him as even he and we might have expected but nevertheless he scored good points and tomorrow he will show us again his strength and his ability to drive a race car very fast.

“This weekend, everything is a little bit overshadowed by the accident of our close friend and mechanic, Alvin. The whole team is still in shock due to this and we surely would like to dedicate today’s victory to Alvin and we are all praying for his speedy recovery and sending a lot of positive thoughts to him”.